One of the things I love about my job is the travelling that is involved. The opportunity to perform in venues around the world, with musicians from different places. Often, sadly, we get to see only a little of the places we visit and you end up only "experiencing" the airport, the hotel room and the concert hall and little in-between. The opposite extreme is when we're fortunate enough to have a residency somewhere, normally this will be for an opera production which calls for the orchestra to be in one place for several days of rehearsals followed by the performances.

I've just returned today from a two week project with one of my most favourite groups - ensemble Pygmalion. We've been performing a new version of Telemann's Brockes Passion. You can get a taste of this amazing project here with this video from one of our concerts for the Krakow Misteria Paschalia Festival. Absolutely awesome music - the horns only had about five numbers so we got to sit and listen to our inspirational colleagues performing night after night. A real pleasure. The final concert from the Paris Philharmonie has been recorded by France Musique for broadcast on the 30th of May, 2017 and you can read the programme for this performance here.

This project started with several days of rehearsals in the outskirts of Paris then concerts in Douai, Compiègne, Perpignan, Bordeaux,  La Rochelle, Krakow and Paris. When I was initially asked for this project one name, that of Perpignan, jumped out. I've been really wanting to visit Perpignan for several years now for the simple reason that it was birthplace of one of my big heroes, Jacques-François Gallay. And, due to a quirk of scheduling, we had two free days before the Perpignan concert - the ensemble was planning to send me back to London, or I could stay in Paris? But, no, I was heading straight to Perpignan! 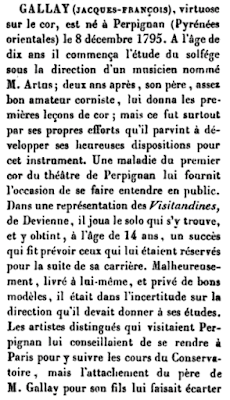 There were several reasons I wanted to visit. Partially because wanted to see if I could find out more about Gallay's youth, early career and the music scene there in the late 18th/early 19th century. There are various aspects of his life prior to his move to Paris that I've wanted to learn more about, such as what kept him there for so long? Gallay only moved to Paris to study in 1820. As he was twenty-four years old he was technically too old to enrol and special dispensation was needed for him to start his studies.

A lot of information we have about Gallay's life pre-Paris comes from François-Joseph Fétis (1784–1871), and his Biographie universelle des musiciens et bibliographie générale de la musique (Bruxelles: Meline, Cans et Compagnie, Vol. 4, p.248–49). Fétis, not always the most reliable of sources, says that Gallay had stayed in Perpignan due to his "attachment" to his father but also paints a very active music scene in Perpignan with Gallay founding a music society in 1818 and making a spectacular debut in 1810 performing the notorious horn solo from the Act II, Scene II aria "Ô toi dont ma memoir" from François Devienne's (1759–1803) opera Les Visitandines (1792). 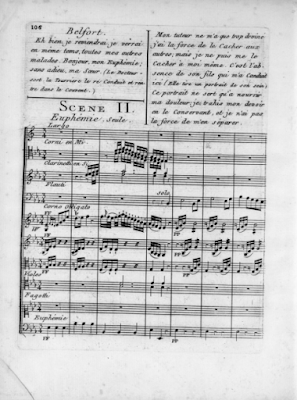 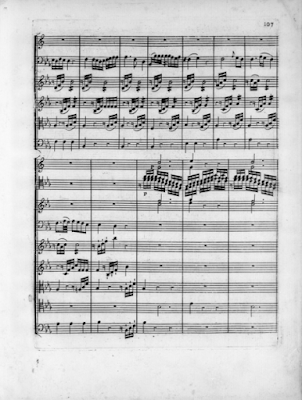 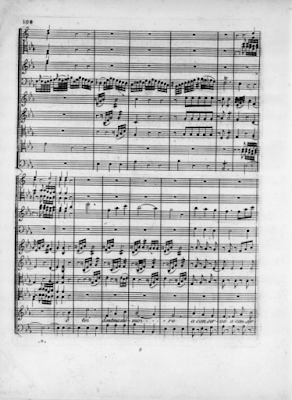 I knew that, as I was going to be in Perpignan over the weekend there was little chance of getting into any archives that might divulge more about Gallay's youth. Perhaps there is, hidden away, a newspaper report about him jumping in when the principal horn of the theatre was too ill to perform the solo in Les Visitandines...? For the time being I had to be happy with visiting the theatre in which this performance took place:

I was also entranced by this description in François-Fortuné Guyot de Fère's (1791–18??) Statistique des beaux-arts en France (Paris: M. Guyot de Fère, 1834, p.295) which described the inhabitants of the region as being similar to Italians in their natural disposition towards music.

As I mentioned above, I knew the archives would be shut but I was so very sad that the Musée d'art Hyacinthe Rigaud, which houses the wonderful portrait of Gallay below, is closed for renovations until the 24th of June 2017. I'm going to have to come back...

Part of the reason I'm interested in this portrait is that I suspect it was made some time after the 24th of July, 1845 when Gallay became a Chevalier of the Légion d'honneur (thank you to Christine Minjollet of the Musée national de la Légion d'honneur et des Ordres de chevalerie
who was able to help me find this date).  The little red dash on Gallay's lapel is the giveaway here. I would love to get up close to this portrait and see if I can find out more about the horn and the music over Gallay's shoulder.

Nicholas-Eustace Maurin (1799–1850) and his brother Antoine Maurin (1793–1860) were also born in Perpignan and both brothers made portraits of Gallay including this one held in the Bibliothèque national de France. The Maurin brothers and Gallay must have been childhood friends given their similar ages (with Antoine born in 1793, Gallay born in 1795 and Nicholas-Eustace born in 1799) and their friendships seem to have continued with all three living in Paris and with the artists portraying Gallay in later life.

The date of 1846 is a suggestion based on a listing of a three-quarter (i.e. half - there's an excellent NPG article here about these terms) bust portrait of Gallay in the Bibliographie de la France of that year.

Another thing I wished to see but didn't have the time to investigate more is this c.1850 portrait by Antoine Ferréol Jean Baptiste Guiraud (1800–1879) of Gallay. Again, next time....

What I did manage to do was have a wonderful time hanging out with today's horn players in Perpignan and I was spoilt indeed! I met up with John Lepoultier, professor at the Conservatoire de Perpignan et principal horn of the Orchestre Perpignan-Méditerranée. John is a very knowledgable horn player and has done research specially into the history of the trompe de chase. You can hear him playing a rousing Gavotte by J.J.Mouret here:

Followed by something a bit softer!

John and I met up and he took me to meet local musician (of many instruments) François Picard. François is the proud owner of a fantastic collection of original horns and we spent a very enjoyable morning trying out various instruments as well as listening to some incredible old recordings he owns. 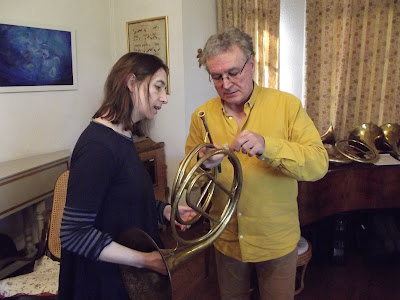 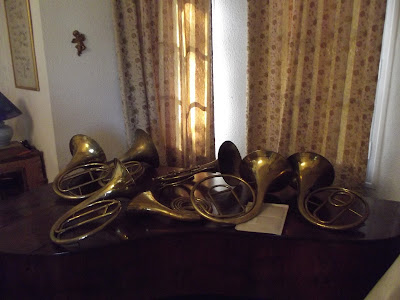 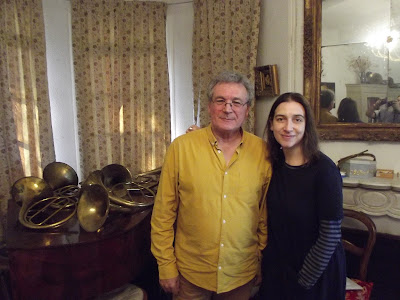 And then afterwards John took me for a wonderful lunch in the picturesque seaside town of Collioure and then drove me around the area so I could see the more beautiful countryside. 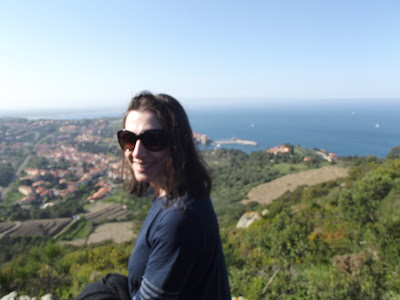 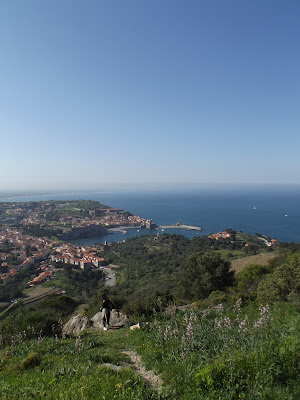 It was a wonderful few days getting to know a little bit more about Gallay's birthplace - next time I hope to return for longer!